I Am Both an Atheist and a Non-Theist

It’s true! I am both an atheist and a non-theist. A lot of you (all Christians, I might add) have said that one is either an atheist or a non-theist, and you have made comments in regards to non-theism being better, more sensible, more logical. But I am both. In fact, all atheists are both. Why? Because atheism and non-theism both mean the same thing: not a theist. A theist, as I’m sure you all know, is someone who believes that there is at least one god. Therefore, someone who is not a theist does not believe that there are any gods. That is what makes someone an atheist and it is what makes someone a non-theist. Don’t believe me? Check the link: http://www.learnenglish.de/grammar/prefixtext.html. Both the prefix for atheist (a-) and the prefix for non-theist (non-) mean not. The only difference is origin. The a- prefix comes from Greek. Non- has its roots in Latin. 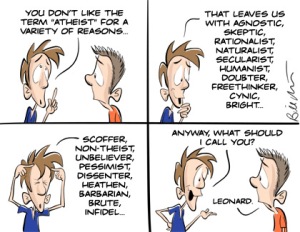 However, it seems that how we label ourselves matters more to people than what the words we use actually mean. So, why do I call myself an atheist and not a non-theist? Is it because I believe that no gods exist as opposed to not believing that any gods exist? No. I both believe that no gods exist and don’t believe that gods exist. In fact, I believe that gods don’t exist because I don’t believe that gods exist. Confused? Me too. And unnecessarily so. We’re humans. We hold beliefs. It’s unlikely that you don’t believe that something exists and don’t also believe that it doesn’t exist. You may say that you don’t know, but it is perfectly possible to form a belief about something that you don’t know. The trick isn’t to not form said beliefs (we all do it whether we want to admit it or not), the trick is to be aware that, while we hold a belief, we could be wrong. And, of course, to collect as much evidence to support our beliefs as possible. So no, I don’t call myself an atheist because I hold a belief as opposed to…what? Not holding a belief…
No, I call myself an atheist because it is an easily understood term. If I tell someone I’m an atheist, they know what I’m saying (kind of). At least they know that I, in one way or another, don’t believe in any gods. They may think that I hate god, or that I’m being rebellious, or that I’m just angry. They may think that I believe that there are no gods when I should simply not believe in any gods (simple my ass). They may think that I’m actually an agnostic, or that I hate theism. All of which are either untrue or non-issues. But at least they know that I don’t believe in gods. If I say that I am a non-theist, people don’t make that assumption. They assume that I’m “finding myself.” They assume that I’m between religions, or I’ve lost my way. They assume that I’m a theist who is not willing to call myself a theist. At best, they wonder with category of non-theistic groups I’m a part of (am I an atheist, an agnostic, a skeptic, a freethinker, a secular humanist?). For the record, I’m technically within all of those groups. I am an agnostic atheist who is also a secular humanist, skeptic, freethinker. And I’m a non-theist. Why should I have to choose just one when they all cover different areas?
I think that there are a number of problems with assuming that I must call myself an atheist or a non-theist. First, it forces me into a single box that I don’t fit in perfectly. Yes, I’m an atheist. But that is not all I am. So why should I solely be defined by my atheism? I am also a non-theist, but, again, that is not all I am. So why should I say I am? Second, it applies other labels to me that I don’t want applied to me. If I say that I’m an atheist, people stick the “asshole” label to me because they assume that all atheists must be assholes. I get the “anti-theist” label stuck to me because people don’t realize that being an atheist doesn’t make me an anti-theist. I get the “you just hate god” label stuck to me because people assume that if they believe in god, I must too. Sadly, the labels I’d get if I called myself a non-theist are worse (in my opinion). I don’t want people to label me as “finding myself.” I know who I am. And I don’t want people to make assumptions about me because the label I use isn’t clear. I want people to use the label that I prefer because that is showing me respect. The third problem is you are trying to fit someone into your labelling system. To tell someone that they are, or should, label themselves in a way that they don’t is arrogant. It’s saying that you know who they are better than they do. You don’t. If non-theist works for you, fine. But atheist works for me.
So please, stop it with this nonsense about non-theist being a better label that atheist. Stop telling me that they’re different. Stop trying to lump me into a category because you think I should either be different than I am or I should call myself something that I don’t call myself. I am an atheist. I am an atheist definitionally speaking, and I am an atheist because that is the label that I chose to use.

This entry was posted on Monday, December 29th, 2014 at 4:09 pm and tagged with agnosticism, Atheism, belief, Christianity, faith, freethought, Religion, secular humanism, secularism, skepticism and posted in Uncategorized. You can follow any responses to this entry through the RSS 2.0 feed.
« Have You Been Discriminated Against Because of Your Religion or Your Lack There Of?
What I think a robust sex education program would look like. Plus a rant! »