My Problem With the Anti-Choice Movement

A few weeks ago I had a conversation with someone who considered themselves pro-life. During the conversation she accused women who have had abortions of killing their babies and said that teenagers who get pregnant are “sluts” and “whores.” Every time I see the anti-choice posters at my university I think about how problematic their movement is, but the conversation I had with this person has convinced me to post my concerns on my blog.

This persons words didn’t so much disturb me because of what she said: I have heard all of that before. The words were problematic, but I was more concerned with the fact that a 17 year old girl thought it appropriate to lay such charges against other women. 17 is about the average age when most people begin having sex. This girl has been taught that she should be ashamed of something that most people begin to do around her age. She feels the need to judge her peers for being normal. She feels the need to hide feelings that she probably experiences daily (she could be asexual or demisexual and not experience said feelings, but in all likelihood she does feel them). I can’t help but feel anger towards the culture that makes teenagers feel ashamed of their own sexuality.

And the anti-choice movement takes full advantage of this culture to shame those of us who have had abortions. When you hear the anti-choicers speak, they talk about how they are pro-women, and how they are simply trying to put an end to an immoral act. They talk about helping and supporting women. That language is problematic in that it ignores trans men who can and have had abortions, but it sounds good. It doesn’t seem problematic. But then you look at their signs. Those signs are very far from being pro-women. They are made to shame and condemn women.

Her blood is on your hands? That is how you choose to speak to someone who is already emotionally strained? You call this pro-woman? You call this support? This is using guilt to shame people out of a decision. Personally, I would never go to this woman with my issues because I wouldn’t trust her to be supportive. I could only assume that she would be judgmental and emotionally hurtful. If you want to help people, this is not how you do it.

This one has all sorts of judgement thrown in. “Abortion kills babies.” Definitionally, this is not true. If it’s in the womb it’s an embryo or a fetus. We don’t define them as “babies” until they are born. This is another guilt tactic. There is no real meaning behind the poster other than to redefine “baby” and “murder” in a way that suits the protestors interest. “Does your doctor kill babies?” Family doctors generally don’t perform abortions. This is an obvious attack on Planned Parenthood, since they are one of the few places that both perform abortions and offer health care to women. Being as they offer affordable care, and their patients often can’t afford to go else where, this is also an attack on low-income women. “Boycott doctors who kill.” And go where? “Stop the baby slashers.” Baby slashers? Really? These are all emotionally charged judgements. They are meant to shame people. One poster directly shames those who have had abortions by saying that they killed their babies. The rest shame the professionals who perform a necessary procedure.

These posters are the worst of them. Rather than simply state why I don’t like them, here are some articles that go into detail about why they are misleading and wrong:
http://www.lifeandlibertyforwomen.org/truth_about_photos.htmlhttp://rhrealitycheck.org/article/2014/10/27/bloody-fetus-pictures-arent-persuasion-theyre-bullying/
http://www.prochoiceactionnetwork-canada.org/articles/bible.shtml
http://www.thisismyabortion.com/
That last one showed a more accurate picture of a surgical abortion. Mine, which was performed at 6 weeks, was a medical abortion. It certainly did not look like the picture above. It looked like an early miscarriage. What does that look like? My period. My abortion looked like my period. There was no visible body parts, there was no obvious fetus or embryo. There was blood. Not even very much of it. It was a light, crampy period. 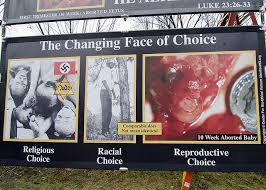 I find it odd that a largely religious group would use this set of pictures. The holocaust was a religious choice? If that were true, wouldn’t that be damning towards religion? Personally I would say it was the result of racism, not religion. I’d also say that racism was an excuse. They used the racism, which was very common at the time, to justify starting a war that was more of a power play than anything. Hitler wanted to prove to the world, including the German people, that they were still a force to be reckoned with. The second picture shows a white man lynching a black man. The American slave owners used the Bible to justify slavery. So, if the holocaust can be said to be caused by racism, the slave trade can be said to have been allowed because of religion. But I don’t see how it can be said to be a choice. Hitler chose to begin to kill the Jews, slavery wasn’t the result of one man’s (or person’s) choice. It was the result of a culture. I doubt that white man in the picture ever said “I think I’ll accept slavery now.” More likely he was raised into it. It’s unlikely a choice was involved. That doesn’t make what happened right, but it does make “choice” the wrong word to use. But again, this poster is all about shame.

The way the anti-choicers treat women who have had an abortion is wrong. They put up posters that publicly shame and humiliate. They tell people that they are murderers and that they are participating in a genocide. In some cases they encourage women to shame themselves by encouraging them to wear posters that say “I regret my abortion.” How is that any different from a parent making their child wear a sign that says “I am a thief”? How is it pro-women or supportive? Shame is not a good way to encourage anyone to stop an action, it is only effective at making people feel bad about who they are. Don’t believe me? Here’s my evidence:
http://www.psychologytoday.com/blog/love-and-sex-in-the-digital-age/201401/guilt-good-shame-bad
http://www.gydoindy.com/7-differences-between-shame-and-guilt/
http://io9.com/whats-the-difference-between-guilt-and-shame-1605122600
http://www.beyondintractability.org/essay/guilt-shame
http://www.thedailybeast.com/articles/2012/01/04/anti-obesity-ads-won-t-work-by-telling-fat-kids-to-stop-being-fat.html
http://www.nbcnews.com/health/diet-fitness/fat-shaming-actually-increases-risk-becoming-or-staying-obese-new-f8C10751491
http://www.naturalchild.org/robin_grille/good_children.html
http://www.psychologytoday.com/blog/the-legacy-distorted-love/201209/shaming-children-is-emotionally-abusive

If you would like some more sources in defense of the pro-choice side, or would just like to read into it a bit more, here are some articles that I think are great and well worth the read:
http://civilliberty.about.com/od/abortion/tp/abortionmyths.htm
http://www.rollingstone.com/politics/news/the-seven-most-common-lies-about-abortion-20140226
http://jezebel.com/5454015/the-pro-life-movement-is-not-pro-woman-an-open-letter-to-sarah-palin
http://www.patheos.com/blogs/lovejoyfeminism/2012/10/how-i-lost-faith-in-the-pro-life-movement.html
http://www.guttmacher.org/pubs/journals/2411798.html

Here’s another article I forgot to add. This one is about why anti-choicers are less likely to hear about abortion than pro-choicers: http://www.dailykos.com/story/2014/11/08/1342580/-If-you-oppose-abortion-there-may-be-something-your-friends-aren-t-telling-you#