It isn’t uncommon to hear the terms strong atheism and weak atheism. Generally, they are used by the religious, namely conservative Christians, to refer to “militant” atheists and agnostics. In many cases, the “strong” atheists are considered the not-good atheists and the “weak” atheists are considered the good atheists. This is a problem. For one, it suggests that the only good atheists are weak ones. Basically, atheists are best when we allow ourselves to be shoved in a corner and ignored. Another problem is that it ignores all the atheists in the middle.
So where did the idea of strong and weak atheism come from? As far as I can tell, it came from the idea of New Atheism. New Atheists are those atheists that are most open to speak out against religion. It is called New Atheism based on the belief that no atheists, or skeptics, have ever been so brash and out spoken about religion before. This is a false belief. While it was more dangerous to speak out against religion in the past, it was done. And it was done as, or more, harshly as it is today. However, throughout much of history, atheism was used differently than we use it today. It was generally used to refer to anyone who didn’t believe in your god. And later on it was used to refer to anyone who was critical of certain accepted beliefs and those who accepted heresies. It wasn’t until the 19th Century when we begin to see atheism used as we use it today. As such, it can be difficult to determine whether or not many of those who were critical of religion in the past were truly atheists. But we do know that the arguments used by the New Atheists are anything but new.

I wouldn’t say that Lord Byron was an atheist. However, this quote is very much critical of religion. It is the type of quote you’d hear from a New Atheist. Think “Religion poisons everything.” 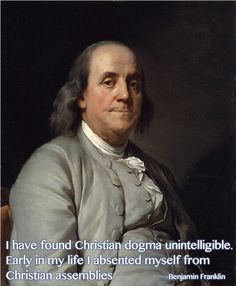 We know for a fact that Benjamin Franklin was a deist. He again is being critical of religion, in this case Christianity, to the same degree that you would hear a modern day New Atheist being critical.

Thomas Huxley was referred to as Darwin’s Bulldog in his day. He’s actually the man who coined the term “agnostic.” He considered himself an agnostic as opposed to an atheist. And yet, he was as critical of religion as any New Atheist today. 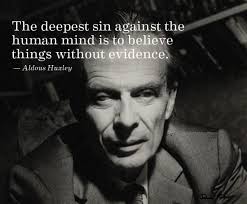 Huxley’s grandson, Aldous, was also quite critical of religion. In many ways, he was more critical than his grandfather.
New Atheists are often seen as dogmatic. They are seen as holding the position that there are no gods. They are the strong atheists. However, this is often an issue of tone. Many New Atheists believe that it is important for atheists to make ourselves known. They want atheists to label ourselves as such. David Silverman is one such New Atheist. Silverman has said that atheists need to call ourselves atheists because of the discrimination against atheists. His arguments come across very much as “atheism is the only way,” but that doesn’t mean that he believes there is no possibility for a god to exist. He is more interested in how society views atheists than he is with arguing that there are no gods.

Richard Dawkins is another New Atheist that comes across as very hard-lined where atheism is concerned. But Dawkins has openly said that he accepts that there is a possibility that there is a god, he just believes that it is unlikely.

These types of atheists are often talked about by religious people as bad atheists. They are called dogmatic, angry, and harmful. But they are, to my mind, activists like any other. They have a cause to fight for and they will fight for it in the way that they think is best. I do not believe that everything they do is useful or good, but I do believe that they fill a necessary role. These atheists are not bad atheists, they are atheist activists.
The opposite of the New atheists, generally agnostics, are considered weak atheists. They are thought to be more the “free to be you and me” types. Chris Stedman is one such weak atheist. He has a different approach to religion from the New Atheists. He works with the religious. But he is also an atheist activist. He is also concerned with how atheists are viewed in society. But he is viewed more positively by the religious. Personally, I like Stedman. I like his approach. But I don’t like how he is viewed as a pushover by both sides. Stedman’s approach is different from the New Atheist’s approach, which means that he reaches a different audience. But it also means that he is viewed as a tool of the religious by atheists and he is viewed as usable by the religious.

Weak atheists are not weak in their atheism. They are as convicted to their atheism as the rest of us are. They also aren’t weak in the sense that they are pushovers. They can be as loud and boisterous as any New Atheist. They just see a different way of achieving the same goal.
But then there are the rest of us. We are neither weak atheists nor strong atheists. We are just as likely to be atheists activists. Honestly, I don’t see how we are all that different from the weak or the strong atheists, nor do I see how the weak and strong atheists are all that different from each other. Except, of course, for the fact that many so called weak atheists don’t actually call themselves atheists.

This entry was posted on Saturday, December 20th, 2014 at 5:40 pm and tagged with Activism, agnosticism, Atheism, social justice and posted in Uncategorized. You can follow any responses to this entry through the RSS 2.0 feed.
« Logical Arguments. Syllogisms, and Logical Connectives.
More Questions for Atheists »